Editor’s note: We’re delighted to announce new columnist Elizabeth Williams who will be writing on the ever changing ever challenging B2B marketing landscape. Williams, Director of Brand and Communications at ADP, is a B2B professional who uses her blog as a way to share the marketing lessons she has learned over her 20 year career.

I always hope the man from India calls to talk about duct cleaning when I have a bit of time on my hands. That way I can keep him on the phone for ages, first by first insisting  that while I don’t have any ducks my chickens are filthy.

Once he works past that and we agree that he is selling duct cleaning, I start asking all kinds of questions about how they clean them, what kind of truck they have, do they use soap, will it upset the dog, can they come during a full moon, what should I make them for lunch before asking if they do radiators too because that seems to be where our heat comes from.

The goal is to keep them on the line long enough that they don’t bother any of my elderly, vulnerable neighbours. I consider it a success if I can get them to both swear at me and end the call before I do.

I have a friend who likes to book appointments with them using a non-existent address. Which I would do but I suspect the poor driver at this end probably pays for that one.

This is, of course, the epitome of sleazy marketing, and a place from which we all move fast to distance ourselves. But this aside, I think there are is still plenty of sleaze left in the marketing ball and I am just so disappointed in us.

If you are a certain age, you probably did something stupid like signing up for one of those record clubs that sent you a record each month unless you remembered to tell them not to. That model dates from the 1920s, when the Book of the Month Club had the bright idea to turn its subscription book model into a negative option subscription book model. Brilliant thinking but actually a little sleazy. At least, however, the BOTMC and Columbia House records were pretty up front about the terms and conditions, and it wasn’t too hard to do the math on what you were committing to in exchange for your 10 free albums.

Not so, is seems with the 21st Century version of this. Now we have the undies of the month club with Adore Me, that signs you up for its $40 a month VIP program when you place your first order. Of course, if you happen to notice and happen to be able to find the little opt-out, you are free to just order. If not, you will spend hours and hours on the phone begging them to cancel your subscription.

Amazon does a similarly annoying thing with its premium club, as does Blue Apron, Birchbox and JustFab. It should come as no surprise that JustFab was dinged for $1.8-million in fines for deceptive marketing and Stamps.com settled a similar suit for $2.5-million. I doubt either amount made much of a dent and it certainly isn’t teaching us any lessons.

The sleaze doesn’t restrict itself to transactions, either. It’s also a tool used to build lists and, disappointingly, it’s turning up in B2B Land. One of my favourite places to find stuff out is the excellent Social Media Examiner website. I even downloaded an ebook. And here is the note I got when I did

If you can’t read it, it says “Thanks for signing up for content updates…Each day we’ll bring you the most valuable blah blah blah” Pardon? I didn’t sign up for a daily newsletter. I downloaded a book. That’s all. People, we need to remember that just because we have coaxed an email address out of someone does not in any way entitle us to mount a daily assault on their Inbox. Even if they’re interested in the content.

Here’s another sleazy trick that’s made its way from Facebook to B2B. 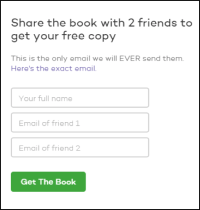 The share-before-you-see thing. We’ve all been lured in by this one: click to see a video of a bear in a wading pool and then forced to first share on our timeline to see it. But what would possess an employee survey technology vendor to ask me to share their ebook with two friends before I can download it. 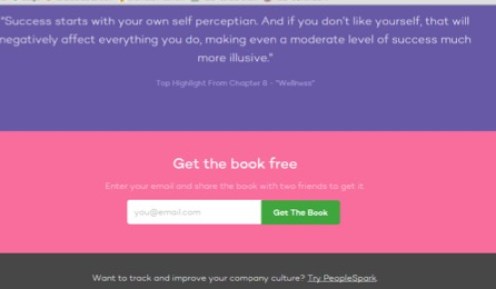 Why the fu*k would I put my reputation at risk just to access their content and build their list? The agency or marketer who came up with that one should be fired.

Another unnecessary act of sleaze is the subscription pop up window. Now, I’m all for begging people to sign up for content (you will see the option to opt-in for this blog at the right and again at the bottom of this post), but I kind of think it’s a nice idea to let people read the content first and then decide.

We have the technology to know when someone is a first-time visitor to our blog or our site, and I think it’s just the neighbourly thing to do to let them come in, look around and then decide if they want to subscribe. The constant pop-up boxes are a bit like inviting someone in the front door and then repeatedly closing every door between there and the living room as they approach. Just rude.

I’ll end with this one. It’s not really sleazy but it’s kind of rude in its way. Here is a landing page for a blog that takes a few clicks to get to. Nice little bit of promo copy and a link to read the post, but again the request to share the crap out of it before we even get to the content. And not just below the link, all over the left side of the page.  Total turn off. Did not read. Did not subscribe. 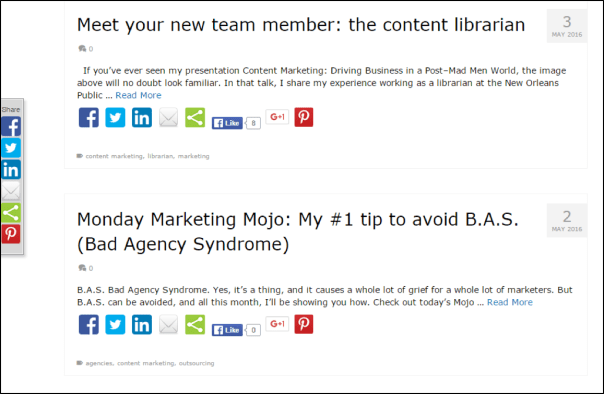 I’m pretty sure that with all the mental horsepower wandering around in our marketing departments and agency bullpens that we can come up with ways to build lists and sell products without being rude, deceptive or sleazy. Go ahead. Prove me right.

This article was originally published on bizmarketer.org.

Elizabeth Williams is the President of Candler Chase Inc., a consulting firm specializing in employee communications and branding. She is a survivor of more than 20 years in the telecom, financial services and technology sectors, and can often be found blogging about brands and speaking at conferences. She keeps meaning to write a book.